Tell President Obama: Stand up for transparency in our food! 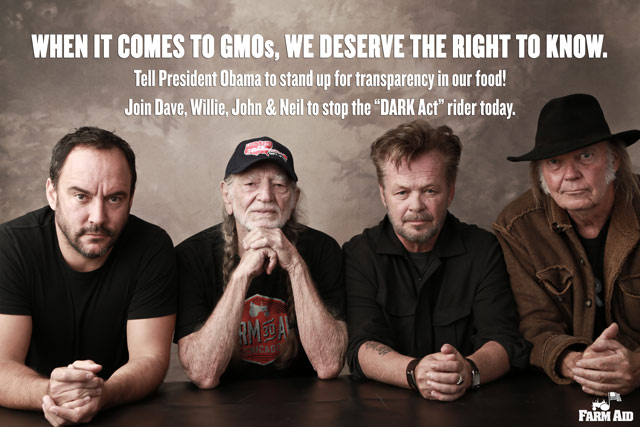 Giant food, chemical and biotech corporations have spent millions to pass what has been called the DARK (Deny Americans the Right to Know) Act. It would preempt GMO labeling efforts already passed in Connecticut, Maine and Vermont and obstruct federal labeling of GMOs.

Together, farmers and eaters helped prevent the DARK Act from making it to the Senate this year. But that didn’t stop lobbyists for the world’s largest food, biotech, and chemical companies from trying to sneak a rider into the year-end appropriations bill that would block the labeling of GMOs.

Thousands of you joined Willie Nelson, John Mellencamp, Neil Young and Dave Matthews in calling on President Obama to stand up for transparency in our food system. Your voices were heard and together we prevented the DARK Act rider from making into the year-end funding bill.

But it’s not over yet. We’re keeping an eye on the process to block any last-minute shenanigans, and we’ll be watching for more developments related to the DARK Act and GMO labeling battles in 2016.

Tell President Obama to use his authority to block the DARK Act Rider! Add your name below to join Willie, John, Neil & Dave in the fight for transparency today!

We, the undersigned, strongly oppose the inclusion of any policy rider in the upcoming omnibus appropriations bill that would deny Americans the right to know if their food has been genetically modified. We ask you to oppose any such efforts and use your influence in shaping this legislation to protect the rights of citizens to know what’s in their food.

Americans overwhelmingly favor labeling of foods that contain genetically modified organisms, or GMOs. That same right is already held by citizens in 64 countries and it is a right that we, as board members of Farm Aid, have fought to attain for some time.

Yet members of Congress are proposing to amend the government spending bill with language preempting GMO disclosure laws enacted by Connecticut, Maine and Vermont and similar measures being considered and debated in states across the country. In spite of the clear public support for labeling and transparency in the food system, major food and agribusiness companies are going around our democratic process to get what they want.

This is an issue that matters dearly to farmers and eaters alike. As citizens, we believe transparency is fundamental to our democracy and indispensable to a fair and competitive marketplace. It is unconscionable that the will of multinational corporations would trump something so essential to American life.

We need you to stand up for us and protect transparency in the food system.

The White House has a critical role in shaping the outcome of this rider. There is no room for corporate riders like this in the omnibus appropriations bill and we urge you to stand up for what Americans want.