Britain’s most used pesticide is linked to a serious liver disease which can be fatal, shocking new study claims 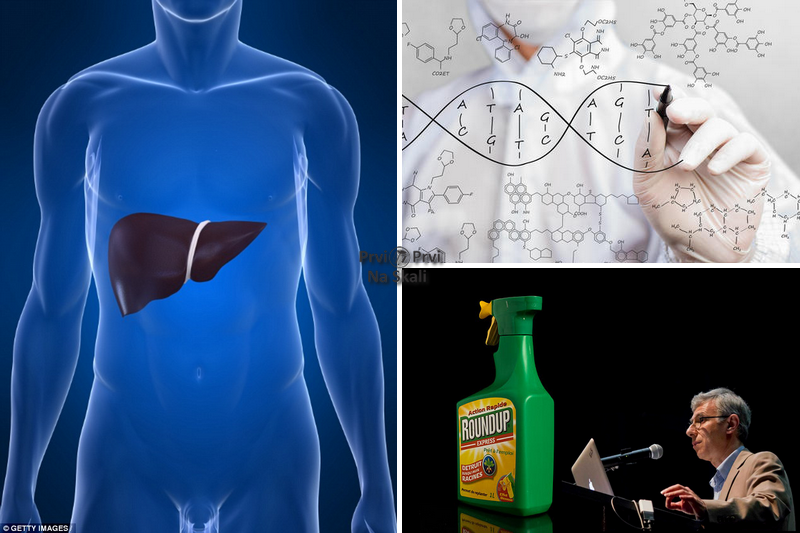 Brussels, 9 January 2017 – A study published today shows that low levels of exposure to the weed killer Roundup over a long period of time can cause liver disease in rats. The findings are likely to bring further public attention to the Roundup’s controversial active ingredient, glyphosate.

The peer-reviewed paper is published in Scientific Reports entitled "Multiomics reveal non-alcoholic fatty liver disease in rats following chronic exposure to an ultra-low dose of Roundup herbicide".(1) The study is unique in that it is the first to show a causative link between consumption of Roundup at a “real world” environmental dose and a serious disease condition.

Cutting edge molecule profiling analyses were used to reveal that Roundup causes liver damage at doses permitted by regulators. Female rats were administered with an extremely low dose(2) of Roundup weed killer over a two-year period and found to suffer from non-alcoholic fatty liver disease(NAFLD). The dose selected was below what people are commonly exposed to in the everyday environment and 75,000 times below what is permitted by EU regulators.(2)

Dr Michael Antoniou, who is a member of the Gene Expression and Therapy Group at King’s College London and one of the authors of the paper, says: “The findings of our study are very worrying as they demonstrate for the first time a causative link between an environmentally relevant level of Roundup consumption over the long-term and a serious disease - namely non-alcoholic fatty liver disease. Our results also suggest that regulators should reconsider the safety evaluation of glyphosate-based herbicides.”

Non-alcoholic fatty liver disease (NAFLD) is a common condition in humans. It occurs in at least one in five of the general population, and in the vast majority of people with type 2 diabetes, according to Dr Antoniou.

The Health and Environment Alliance (HEAL), one of a growing number of civil society actors, cancer charities and medical professionals, has repeatedly called for an end to the licensing of glyphosate.

"Glyphosate is already classified by IARC as a ’probable carcinogen’ by the International Agency for Research on Cancer (IARC) of the World Health Organization. It is also described as a ‘potential endocrine disrupting chemical’. This new study adds to evidence about the likely harm to human health from Roundup and other glyphosate based herbicides. Given people’s unavoidable exposures from the massive increase in the use of these weed killers over the past 30 years, surely it is time to ban it on precautionary grounds?" says Génon K. Jensen, Executive Director, Health and Environment Alliance (HEAL).

In 2015, the International Agency for Research on Cancer (IARC) of the World Health Organization classified glyphosate as a "probable human carcinogen".(3) The ensuing scientific and public debate led the European Commission to announce that it would extend glyphosate’s licence for 18 months rather than re-authorise for the previously anticipated period of 15 years, until Europe’s own classification process for glyphosate is completed.

At the end of 2016, the European Chemicals Agency (ECHA) begun to consider whether glyphosate should be classified as a human carcinogen under European harmonised classification and labelling law. Its Risk Assessment Committee (RAC) will continue discussions at its next meeting in March 2017. It expects to reach a final opinion on the proposed classification in June or September this year.(4) The legal deadline for the adoption of RAC’s opinion is November 2017, after which it must still be officially adopted by a Commission committee composed of Member State representatives.(5)

Meanwhile, several EU member states have already taken action to curb the use of glyphosate. In July 2016, Malta’s Environment Ministry asked the national pesticide regulator to implement "political direction given by the ministry towards a ban".(6) The French Environment Minister has told garden centres to stop sales of glyphosate to individuals unless a qualified vendor provides advice. Measures have also been introduced in the Netherlands and Denmark.

Before the Commission took its decision on glyphosate licensing, a petition signed by over 250,000 European citizens urged the Health and Food Safety Commissioner, Vytenis Andriukaitis, and responsible ministers of the member states "to decline the licence renewal of glyphosate".(7)

A weedkiller commonly used on UK food crops and gardens has been linked to a serious liver disease by British academics.

Minute quantities of glyphosate, sold under the brand name Roundup by Monsanto, caused a fatty liver disease in a feeding study using rats.

The research was led by Dr Michael Antoniou, of Kings College, London, who said the findings raise serious concerns for human health.

He called on regulators to re-think both the use of Roundup on farms and the risk to humans caused by residues in food.

The medical condition linked to the weedkiller is non-alcoholic fatty liver disease (NAFLD), which is usually found in people who are overweight or obese.

Dr Antoniou said: ’The findings of our study are very worrying as they demonstrate for the first time a causative link between an environmentally relevant level of Roundup consumption over the long-term and a serious disease.

’Our results also suggest that regulators should reconsider the safety evaluation of glyphosate-based herbicides.’

Glyphosate or Roundup is the most commonly used weedkiller on British farms and around the world. It is also sold as a weedkiller for household gardens.

Significantly, the chemical is a mainstay of GM farming, particularly in the United States.

GM crops like soya and corn or maize have been modified in the laboratory by companies like Monsanto to make them immune to spraying with Roundup.

This means that farmers can douse their crops with the chemical which kills off any weeds but allow the food plants to survive.

There is recent research to show that low levels of weedkiller residues from these plants end up in the human diet in the USA in everything from breakfast cereals to corn snacks and biscuits.

Supporters of GM farming, such as the former Conservative Food and Farming Secretary, Owen Paterson, have used the fact GM crops and farming techniques have been used in the USA for 20 years as proof they are safe.

The British research, which has been peer-reviewed by experts to ensure the study was properly conducted, is the first to identify a risk to human health.

Dr Robin Mesnage, a research associate at Kings, said: ’The concentration of glyphosate that was added to the drinking water of the rats corresponds to a concentration found in tap water for human consumption.

’It is also lower than the contamination of some foodstuffs.’

The team examined the livers at a molecular level and found evidence of cell damage, serious fatty liver disease and areas of dead tissue or necrosis.

They concluded: ’The study is unique in that it is the first to show a causative link between consumption of Roundup at a real-world environmental dose and a serious disease condition.

’These results demonstrate that long-term consumption of an ultra-low, environmentally relevant dose of Roundup at a glyphosate daily intake level of only 4 nanograms per kilogram of body weight per day, which is 75,000 times below EU and 437,500 below US permitted levels, results in non-alcoholic fatty liver disease.

’Regulators worldwide accept toxicity studies in rats as indicators of human health risks. Therefore, the results of this latest study may have serious consequences for human health.’

The fact the research has been peer reviewed and published in the journal Scientific Reports means the methods have been scrutinised and verified.

The Crop Protection Association, which speaks for Monsanto and other chemical companies, questioned the validity of the King’s study.

The CPA said: ’Glyphosate is amongst the most thoroughly tested herbicides on the market, and those studies by expert regulators have consistently concluded that glyphosate does not pose a risk to public health.

’Glyphosate is a crucial tool in a farmers’ armoury. To put things in perspective, glyphosate is less toxic than baking soda, table salt, the caffeine in our coffee and many other products we all use or consume regularly.’

Non-alcoholic fatty liver disease is the term for a range of conditions caused by a build-up of fat in the liver.

It’s usually seen in people who are overweight or obese.

A healthy liver should contain little or no fat. It’s estimated that up to one in every three people in the UK has early stages of NAFLD where there are small amounts of fat in their liver.

Early-stage NAFLD doesn’t usually cause any harm, but it can lead to serious liver damage, including cirrhosis - which can be deadly, if it gets worse.

Having high levels of fat in your liver is also associated with an increased risk of problems such as diabetes, heart attacks and strokes.

If detected and managed at an early stage, it’s possible to stop NAFLD getting worse and reduce the amount of fat in your liver.