Increasing number of deaths due to glyphosate 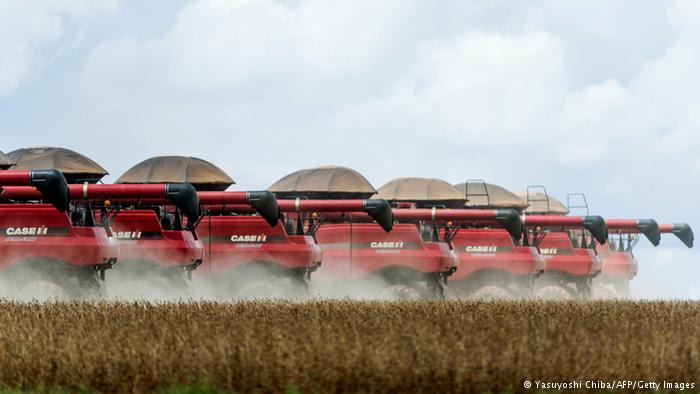 Combine harvesters crop a soybean field, in Brazil (Photo: YASUYOSHI CHIBA/AFP/GettyImages)
Deutsche Welle: What is your experience with the herbicide glyphosate, particularly as it is used in Argentina?

We can clearly see that much more people are getting sick and suffering from new illnesses due to glyphosate. They are more frequently affected by cancer, especially lung, breast and colon cancers. We have analyzed the relationship in different studies.

People in some rural areas are suffering from cancer three times more than before, and cancer has become the main cause of death in some locations with soybean cultivation. For instance, in the small town of Monte Maíz, we found that in 2014 there were 35 cases of cancer. According to the data of the Health Ministry there were only 11 cases, but we have found 24 additional cases.

Children and unborn babies react particularly to environmental toxins. What is your analysis on this?

Around 12 million Argentines live in soybean cultivation regions. They live in villages surrounded by soybean fields, in which glyphosate is being sprayed. We call them pueblos fumigados - sprayed villages. In those places, we have observed that the number of miscarriages has greatly increased. Usually, the rate of miscarriage in humans and animals is 2 percent, but in these places the rate of abortion is between 5 and 6 percent.

In addition, the number of deformations in these places has also strongly increased. The province of Chaco is a soy-growing area. There, we found that the numbers of deformations quadrupled from 1997 to 2008. During the same period of time, the cultivation of soybean in the province increased sevenfold. I work in a clinic for newborns, and I see many children dying.

What is the political response?

The problem is that politicians protect the trade of soybeans and glyphosate. They earn a lot with through soybean cultivation, and the state receives tax revenues. The government downplays the health problems encountered - it tries to hide them. But it is getting more difficult as the problem increases.

What kind of problems could there be in the future?

This kind of agriculture creates health costs that are not paid by polluters. This is a problem. Moreover, we see that food is contaminated by glyphosate, and the allowed limits are exceeded.

Even our cotton contains large amounts of glyphosate, and we have found residues from glyphosate in sterile dressings and tampons. This is really dangerous, because glyphosate is carcinogenic.

What are the alternatives?

Agriculture has to be free of poisons. Since our children, neighbors and fellow citizens eat the food, it must be healthy and not contaminated. For this reason glyphosate has to be banned. Agriculture with less of these substances is possible but it requires more work, care and attention.

Which direction do you think the debate on glyphosate in Argentina will go?

There is a strong movement that rejects spraying with glyphosate. Some villages have prohibited spraying in their regions, and are impeding the spraying teams from entering the villages.

For now, governments in South America and in the European Union are protecting commercial interests. But these governments must act. A reputable society must protect human rights and not only the interests of capital.

Dr. Medardo Ávila Vázquez works in a hospital in Córdoba, Argentina. The pharmacologist and pediatric specialist conducts epidemiological research into the effects of pesticides on health. He belongs to the Argentine doctors’ network Médicos de Pueblos Fumigados(Doctors for Fumigated Villages).

The interview was conducted by Gero Rueter.