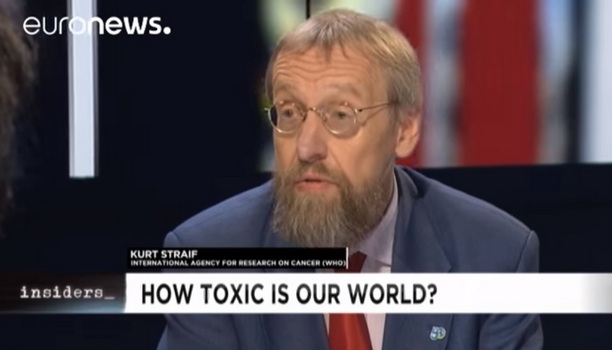 Is glyphosate dangerous or not? To find out… I’m joined by Kurt Straif, a senior scientist with the International Agency for Research on Cancer.

“Our evaluation was a review of all the published scientific literature on glyphosate and this was done by the world’s best experts on the topic that in addition don’t have any conflicts of interest that could bias their assessment, and they concluded that, yes, glyphosate is probably carcinogenic to humans based on three strings of evidence, that is clear evidence of cancer in experimental animals, limited evidence for cancer for humans from real-world exposures, of exposed farmers, and also strong evidence that it can damage the genes from any kind of other toxicological studies.”

euronews: “Why isn’t glyphosate banned considering these findings which are damning?”

Kurt Straif: “This is really an independent review of all the published literature that then leads to a classification about what we know about the substance and particularly its cancer-causing effects, but then it’s up to other agencies, the WHO internationally or other national agencies to turn that into a risk assessment and decide on the different exposures in our use, for farmers, from our diet, in cosmetics, wherever the substance can end up, to come up with conclusions.”

euronews: “Last May a joint Food and Agriculture Organization / WHO panel gave glyphosate a clean bill of health, Why this change of heart?”

Kurt Straif: “Our classification of the cancer hazards of glyphosate still stand. We are the authority to classify cancer substances worldwide for the WHO, and it was then this other panel that looked at a very narrow angle of exposure from daily food, and then came up with the conclusion on how much of that may be safe or not.”

euronews: “But as a consumer, as a farmer, as an occasional beer drinker, as somebody who likes to sit in parks that have been treated with glyphosate, what and who should I believe?”

Kurt Straif: “I think it’s important to understand the literature that our assessment that glyphosate can cause cancer in humans still stands, and then you have to look at the other assessments for the specific scenarios, and that is not my authority to comment on these evaluations.”

euronews: “There were credible reports that emerged after this joint FAO-WHO panel back in May that some of the scientists had received payoffs by Monsanto, the number one producer of glyphosate. As a scientist are you disturbed by these kinds of reports?”

Kurt Straif: “It is an important topic that needs important scrutiny, yes.”

What are endocrine disruptors?

Here is a definition according to the American National Institute of Environmental Health Sciences:

Endocrine disruptors are chemicals that may interfere with the body’s endocrine system and produce adverse developmental, reproductive, neurological, and immune effects in both humans and wildlife. A wide range of substances, both natural and man-made, are thought to cause endocrine disruption, including pharmaceuticals, dioxin and dioxin-like compounds, polychlorinated biphenyls, DDT and other pesticides, andplasticizers such as bisphenol A. Endocrine disruptors may be found in many everyday products– including plastic bottles, metal food cans, detergents, flame retardants, food, toys, cosmetics, and pesticides. The NIEHS supports studies to determine whether exposure to endocrine disruptors may result in human health effects including lowered fertility and an increased incidence of endometriosis and some cancers. Research shows that endocrine disruptors may pose the greatest risk during prenatal and early postnatal development when organ and neural systems are forming.

Approval of active substances in the EU

A plant protection product usually contains more than one component. The active component against pests/plant diseases is called “active substance”. The European Commission evaluates every active substance for safety before it reaches the market in a product. Substances must be proven safe for people’s health, including their residues in food and effects on animal health and the environment.

In 2015 the International Agency for Research on Cancer (IARC) classified glyphosate as "probably carcinogenic to humans".

They made this conclusion from "limited" evidence of carcinogenicity in humans for non-Hodgkin lymphoma (from real-world examples where exposure had occurred). The human evidence came from several studies, since 2001, in mostly agricultural exposures in the US, Canada and Sweden.

The result is based on a review of roughly 1000 studies.

Glyphosate, key ingredient in Monsanto’s bestselling herbicide, has European licence extended for 18 months despite warnings it is ‘probably carcinogenic’.

I want to stress again that the EU’s authorisation procedure as regards pesticides is the strictest in the world. It takes years of scientific assessment before an active substance is authorised – or renewed at EU level.

I believe it is important to clarify that once an active substance is approved – or renewed at EU level – it is then up to Member States to authorise the final products (the herbicides and pesticides themselves) put on their respective markets.

The Member States who wish not to use glyphosate based products have the possibility to restrict their use. They do not need to hide behind the Commission’s decision.

In all, the EU’s assessment of glyphosate has taken 3 years, involving public sector scientific experts from EU’s agencies (EFSA and ECHA) and national authorities in all 28 Member States.

Is ‘Glyphosate’ herbicide a health risk?