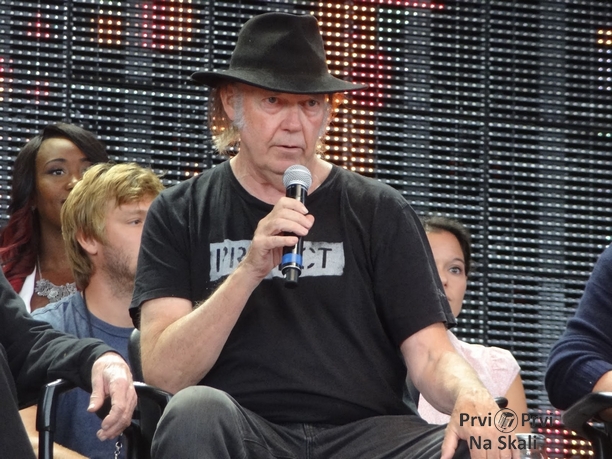 In addition to providing a stunning performance during the 31st Farm Aid concert in Bristow, VA Neil Young stole the show at the press conference before the event began.

While Farm Aid has always been focused on saving family farmers who are in distress, decades of corporate control and monopolization of the American food supply has forced the organization to also move toward helping restart the tradition of family farming and facilitating the good food movement. Obviously, GMOs have become a major issue as a result. So when it came time for Young to speak at the press conference, the godfather of grunge didn’t hold back.

Speaking fresh on the heels of the Bayer/Monsanto merger, Young spoke about the growing concern over corporate control over the food supply and the fact that this merger is a frightening new development in the corporate war on American agriculture. He also took aim at Barack Obama who has supported, facilitated, and pushed corporate control since the day he took office.

Neil Young & Promise of the Real: ‘The Monsanto Years’ Film

We have just begun. This is a revolution. And we will look back on this one way or the other in ten or fifteen years and see what folks like this are doing. We recently have seen giant corporations that are selling for billions and billions of dollars that are joining together and we heard just a few minutes ago about how somebody was eating bad food and got sick and had to take a lot of drugs and now they are eating good food and are starting to not take so many drugs. And you have to notice that one of the biggest drug companies on the planet and one the largest pesticide providers on the planet, Monsanto and Bayer, have just joined together.

And if our government lets them do this and we can’t stop it with the regulatory laws then we’re going to have them working together. And this is what you’re up against. This is a huge thing. That’s why you really are heroes. Because these are huge corporations and they don’t want you to give your food to the people. They want to give you their seeds and they want to control you. And they want to sell the food that has been degraded. And they want to sell it – and drugs – at the prices that allow these giant corporations to support each other. It’s so big that you can hardly see it. People don’t really believe that this is really happening. But it is happening and our politicians and our government, especially our president, is behind it. And it is something that needs to be addressed at our level where people can do things for themselves, where people take back their own rights. You have a right to the land. You can grow your own food.

There’s another video coming up with someone in it who is so happy just to be growing food in their neighborhood. And it’s a beautiful thing. These people are empowered because they’ve made it possible to feed their own families with food that they grew like their grandma’s did. And we can’t lose that. This is the critical part. These are revolutionaries, these people. This is a huge thing. It’s just starting to take hold. So, you know, try to make sure when you buy your food you’re supporting these kind of people, that you’re not buying from the corporations, that you’re not buying these huge loads of food that come in from God knows where in giant metal boxes and everything. Do not do that if you can figure out how to stop it. Support your friends and support the land and support the people that want to care for the land. The revolution starts with us. It starts with you and it starts with people like this.

Later, when on stage toward the end of the concert, Young reiterated similar sentiment stating that we are witnessing a revolution brewing. Before beginning “Harvest Moon”, Young pointed out a shirt in the audience, saying “I like that shirt. That shirt says ’Fuck Monsanto!’ Fuck it.”

Young has never been shy regarding his feelings about Monsanto. Only last year, he wrote, recorded, and released an album entitled The Monsanto Years where he was backed by Lukas Nelson and Promise of the Real. Young came under attack by Monsanto shills and Starbucks but he has refused to back down. In fact, it seems he is turning it up a notch.

Brandon Turbeville – article archive here – is an author out of Florence, South Carolina. He is the author of six books, Codex Alimentarius — The End of Health Freedom, 7 Real Conspiracies,Five Sense Solutions and Dispatches From a Dissident, volume 1 and volume 2, The Road to Damascus: The Anglo-American Assault on Syria,and The Difference it Makes: 36 Reasons Why Hillary Clinton Should Never Be President. Turbeville has published over 600 articles dealing on a wide variety of subjects including health, economics, government corruption, and civil liberties. Brandon Turbeville’s podcast Truth on The Tracks can be found every Monday night 9 pm EST at UCYTV. He is available for radio and TV interviews. Please contact activistpost (at) gmail.com.